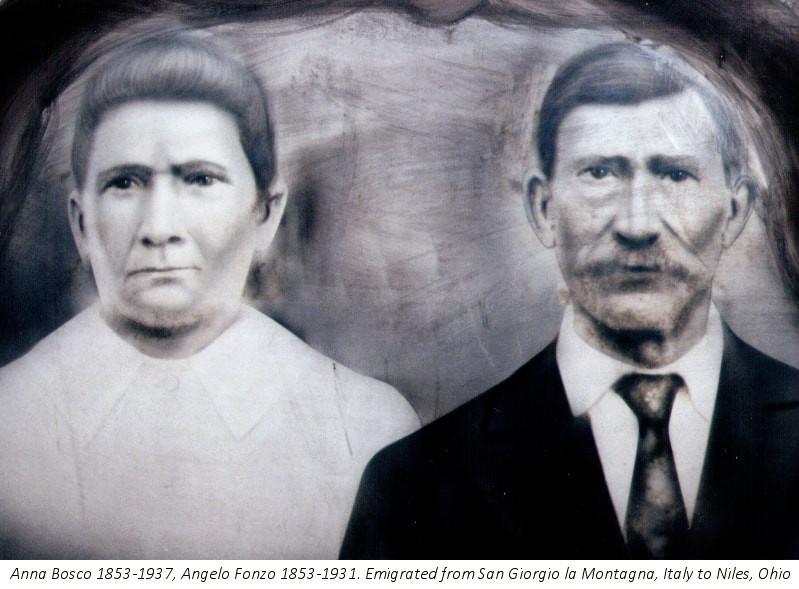 Everywhere I look, I see an increasing interest in genealogy.

I have been actively doing genealogy since I was a child - I love genealogy.  Currently, I volunteer at the Nashua Family History Center as a librarian, the Nashua Historical Society as a researcher, I run a Facebook page called 'Genealogy in Acerra, Italy', I photograph tombstones as a volunteer for Find A Grave, and I love watching Genealogy Roadshow and Relative Race.

I started researching when I was about 10 years old since my mother, a professional genealogist, took me with her to libraries and graveyards for years.  I've focused on my husband's Italian ancestors for the past 23 years.  Once you find out what town in Italy your relatives came from, the research becomes easier, but sometimes that first step is the hardest.  I am here to help you start with that first step and successfully get you past those challenging brick walls.

Hire Deborah to help with your research 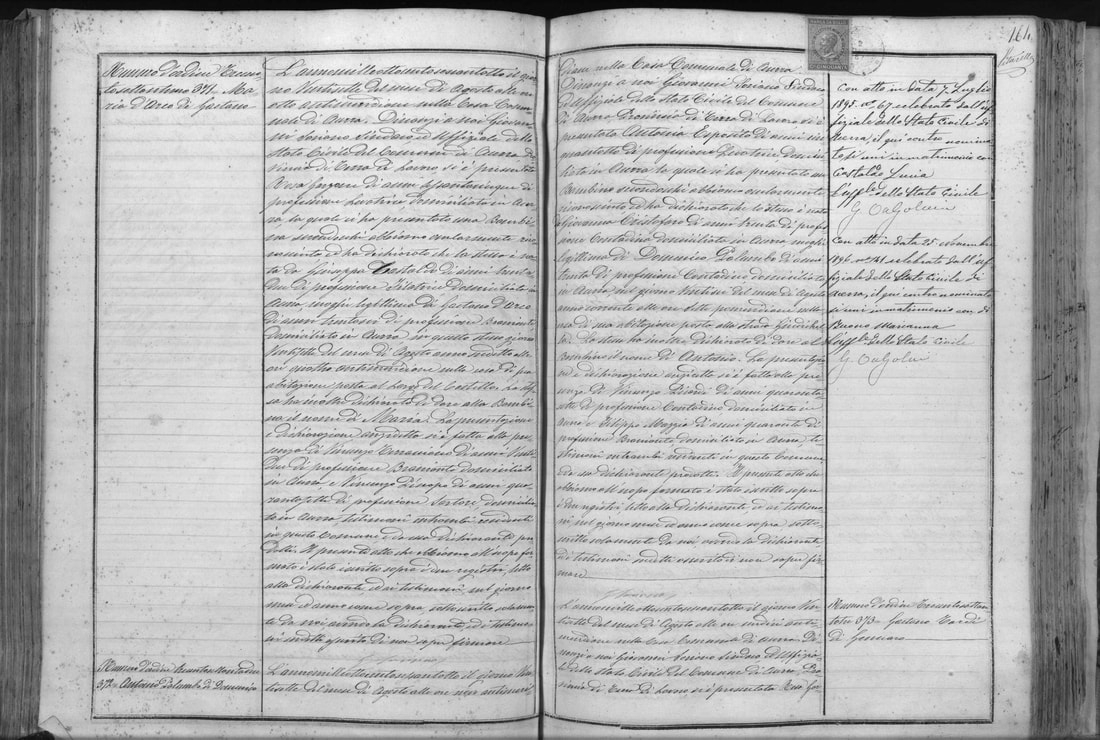 Photo released into public domain by its author Balzacle 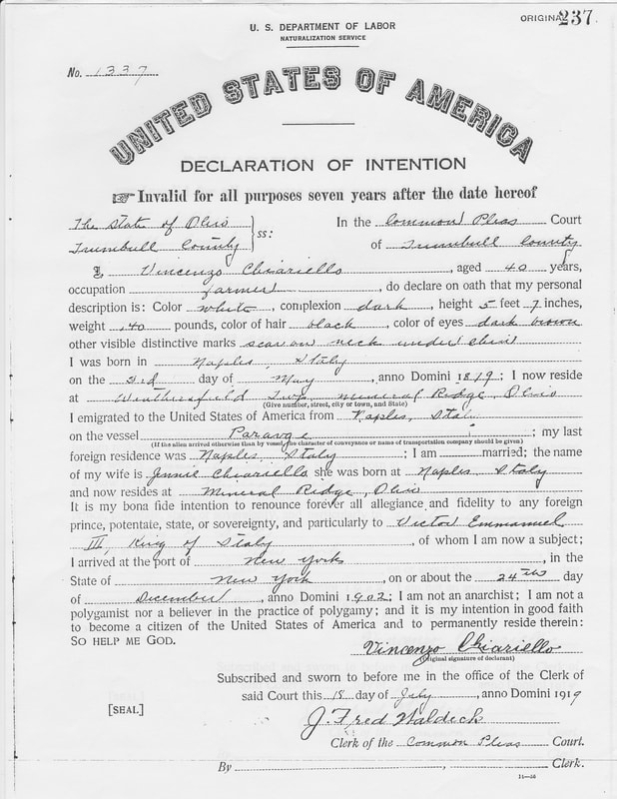 How I Got Started With My

As you can see from Vincenzo Chiariello's Declaration of Intention, he was born in Naples, Italy.  Except he wasn't.  The hardest part of researching our Italian ancestors is finding where they came from.  The second part is finding the records.  In this case I was fortunate since researching in Naples is exceptionally difficult and I leave that to those who are experts in that area.
Vincenzo's death record was filled out by his son who knew that his father was born in Acerra, Italy, the son of Samuel Chiariello and Josephine Carrera.  And thus my journey began.  There are lots of Acerra records online and everyone in Acerra is pretty much related to everyone in Acerra by marriage.
To me family history is not a tree but a  giant puzzle that I keep adding pieces to.  I laugh when I'm asked how we are related and the answer is the 4th cousin of the 2nd wife of the 3rd cousin of the wife of the uncle of my husband's 4th cousin three times removed.  Or something like that.
I love genealogy and I just can't stop.

Advanced - How to Do Family Research

My family history for the most part was just a bunch of names and dates.  I knew nothing about these people but as I watched Genealogy

Road Show I loved how they told the story of the area and time which brought the ancestors to life.
So I was hunting for a photo of the Petty homestead for the Lacoe Family Reunion.  I knew it was in Milwaukee, Pennsylvania so I started Googling.  First I learned Milwaukee is an unincorporated community and is part of Ransom.  Then I learned Ransom is too small for its own library so I moved on to the next town over where a bunch of my relatives lived - Newton.  But all I was finding was a library in West Newton.  As I scrolled down, at the bottom of the first

and Ransom Townships, Lackawanna County, Pennsylvania and since the book was out of copyright, it was available online in full.
Not only did I find a photo of the farm, but I found a map of Ransom which showed where everyone lived.  And I recognized the names since the families intermarried.
I also learned more than just names and dates for my great great

grandfather.  Page 244:  "First house built about 1840 by Barney Dersheimer.  During the summer of 1908 Mr Petty [Milton W. Petty] tore down most of the old house and built the present home,

containing ten large rooms. 90a, 2c, 3h, 2 hogs."  Page 212:  "Mr. Petty is one of the largest truck and fruit growers in Ransom and Newton townships, and about the first to produce berries this side of the mountain. About 1880 he started with raspberries, and a few years later produced over four hundred bushels of strawberries in a season. He has a vineyard of about three hundred fine grape vines and over one hundred and fifty pear and plum trees."
So I got lucky.  But if my family had not been named in the book, I knew Peter Petty arrived after his son was born in 1859.  The land was very fertile and "climate is well adapted to the apple, pear, plum, cherry and grape.  While in some localities, peaches in the perfection of flavor are raised successfully.  The strawberry, blackberry and raspberry grow spontaneous, and when cultivated the yield is very abundant and of the highest quality of fruit." And the sulky plow was making it possible for a man to easily plow a rocky field.  In 1912, when the book was written, Milwaukie [earlier spelling] had about 20 families "but counting every person living within Milwaukie School District the population is about 175. The inhabitants are thrifty and industrious, nearly all owning their homes....Unlike many other towns, Milwaukie is quite free from the spirit of gossiping, and as a rule, everyone attends to his own business..."  In 1859 the Methodist church was built.
By learning about the community, I also learn where to find the records.  Lackawanna County was not formed until 1878 meaning Peter Petty was living in Luzerne before that.  Before moving to Milwaukee, Pennsylvania, Peter Petty lived in Wilkes-Barr and Pittston and records show up citing Wyoming which is confusing  because there is a Wyoming borough which is part of Pittston, a Wyoming County, and a Wyoming Valley.  Peter is in the geographical area called the Wyoming Valley.

How To Do Family Research 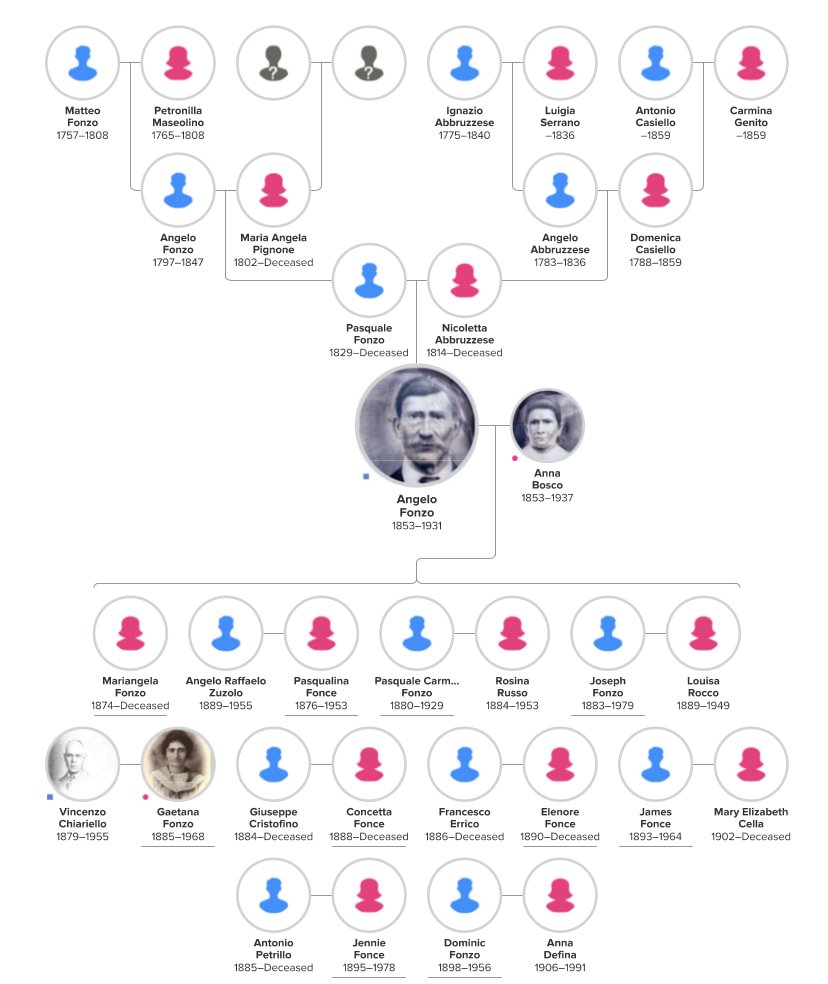 Where do I start?

Start with what you know.  Look at your papers.  Talk to your relatives.  Then move on to step 2. 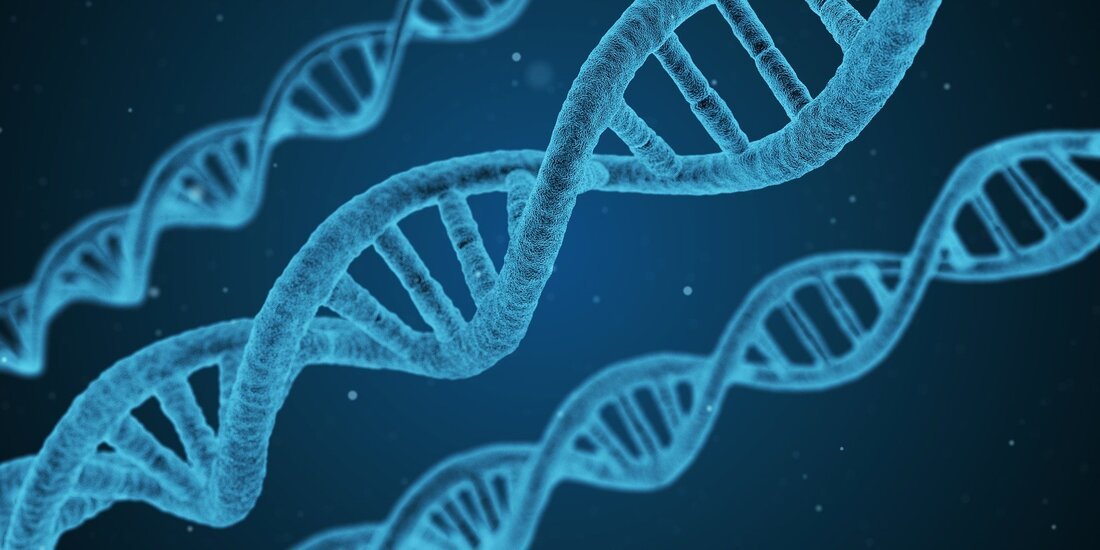 I recently had a client who felt I was an idiot and not qualified to be a genealogist because the records I found did not agree with her DNA results.   What she meant was my findings did not agree with how she thought she fit into the Ancestry trees of her DNA matches.
DNA is great for proving a blood relationship and I’ve had fun reaching out to cousins I didn’t know and sharing photos and stories, but your DNA results don’t equal a family tree.

For example, in my DNA results I have a C.M. who is a "Close Family -1st Cousin." My parents are only children so I cannot have a 1st cousin. However, the DNA does not lie.  Did one of my parents have a sibling they didn't know about? I reached out to C.M. and she told me she was the child of my biological father. I was not surprised since the affair was a factor in my parents’ divorce and I knew I had a half-sibling.
C.M. knew her biological father was David Surname and his mother was Barbara Surname living on Long Island, New York.

Which is why I told my client to request a Stato di Famiglia from the town which would either confirm my findings or prove I am an idiot.